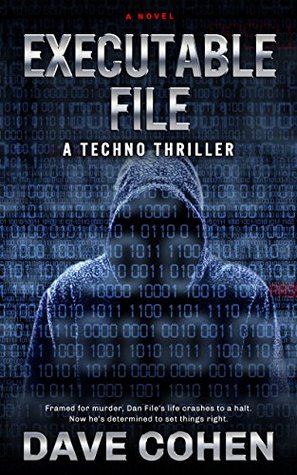 It isn't a thriller in the traditional sense it is as the cover says a techno thriller, it's kind of like Hackers meets The Fugitive. Half of the book is the build up, after the prologue we met college Dan File and along the way how he befriends the football player Brax Johnson and fellow computer nerd preppy Will Goings. Dan is a natural when it comes to computer programing, him and Will develop a method to get high speed internet in rural areas as a school project and Dan uses his hacking abilities to hack into the other schools computers and steal the playbook of the team, and makes a mint on betting on good ole Georgia Tech. This is what gets him kicked out of college. Not long later and after some very amusing pranks Dan pulls over on his loser of a boss at the Best Buy type store he works at Dan and Will meet up again this time Will has connections that want to buy their method of high speed internet for rural areas. Since Will designed it and Dan programmed it they are both given jobs to handle the project. Unfortunately the guys who are hired to oversee the project are a couple of asswipes and Dan ends up pulling a bunch of pranks on them as well. Through these pranks Dan learns something big and because of this the two asswipes are fired and Will and Dan are given their jobs. It's a shame that one of those two asswipes holds a grudge and Dan ends up with a murder charge.

The latter half of the book Dan is trying to clear his name. During a prison transfer, which Brax also happens to be on also falsely accused of something he didn't do, crashes and all the inmates escape. Dan and Brax decide to stick together and with his hacking Dan is able to create fake IDs for them both and obtain jobs so they can afford some place to live and eventually buy a cheap car. During this time Dan uses his talent wisely and gather information and the proof he needs to prove his innocence, but getting to that point isn't all that easy.

The journey from beginning to end was entertaining. I needed something smart and nerdy and this really hit the spot. Dan is adorkable and his harmless pranks were funny he is his own comedic relief. Cohen goes kind of goes into detail about the tech stuff, which was fine with me. Overall, aside from the parts that felt a little slow I really liked this one; where the story went and how it got there I enjoyed it.

Hannah Da Bink
The main thing in my life are my kids. The little hellions keep me busy. Secondly is a tie between my crafting and reading books. I love to craft; I am always making something or other all kinds of craft from mixed media to crochet. Otherwise, I have my nose stuck in a book. I love to read. I love romance novels, trashy or sweet. I love suspense, bite your nails, looking over your shoulder suspenseful stories. See blog page About Hannah Da Bink for more.

Follow me to keep up to date on my posts